Bosnia and Herzegovina, which was exposed to ethnic cleansing after the collapse of Yugoslavia, is facing its most serious crisis after the Dayton Agreement that ended the war in 1995. For the first time in a long time, experts stated that the probability of war was this high. The international community's High Representative to Bosnia, Christian Schmidt, spoke about the political tension that started after the genocide denial law announced in July by his predecessor, Valentin Inzko, and declared that a new war is at the door if the pro-secession Serbs are not stopped. 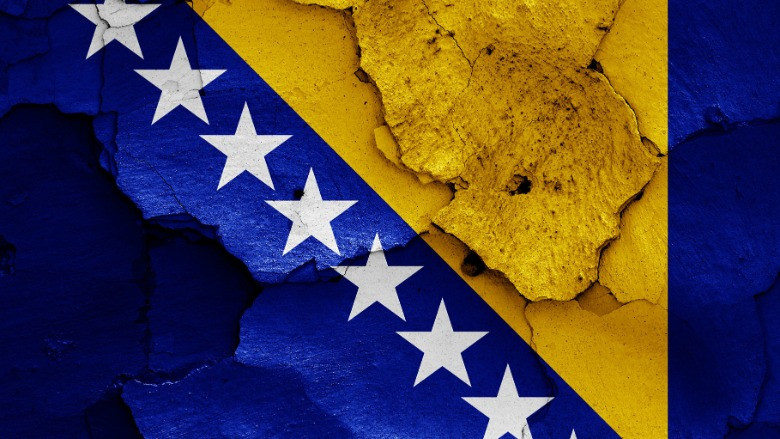 Bosnian Serb leader and Serb member of the Presidency of Bosnia and Herzegovina, Milorad Dodik, advocates the separation of Republika Srpska, one of the two entities in the country. In the past few days, Dodik's decision to withdraw from judicial, administrative and financial state institutions and the announcement that the Serbs will establish their own armies increased the tension in the country. Even though these moves of the Bosnian Serbs are not named, they are seen as important and big moves on the way to separation.

THE BASIS OF THE CRISIS LIES IN HISTORY

At the beginning of the 1990s, the states that made up Yugoslavia began to declare independence one by one. The Iron Curtain, which was pierced by the influence of Mikhail Gorbachev's Glastnost and Perestroika policies, finally collapsed completely, the Eastern Bloc was dissolved, and then the Union of Soviet Socialist Republics was dissolved. In Yugoslavia, which sees itself neither close to the West nor to the East, the wind of independence began to blow strongly. After Croatia and Slovenia, Bosnia wanted its independence. The decision taken under the leadership of Aliya İzzetbegovic was followed by one of the bloodiest wars in recent history. More than 100,000 people were killed and more than 2 million displaced during the war between the forces led by the Bosniak army and the Serbian army. The Serbian army killed 8 thousand Bosnians in Srebrenica, committing the only genocide seen in Europe after World War II. The war, which started on March 1, 1992, ended with the Dayton Agreement on December 14, 1995.

In order to better understand the current crisis, it is necessary to look at the Dayton Agreement, which ended the Croatian and Bosnian wars. The agreement, named after the city of Dayton in Ohio, USA, from which it was initialed, shaped the state structure of today's Bosnia and Herzegovina. The agreement was signed on 14 December 1995 in Paris, the capital of France, by President of Bosnia and Herzegovina Aliya Izetbegovic, President of Serbia Slobodan Milosevic and President of Croatia Franjo Tudjman. The war was brought to an end by the establishment of one of the most complex political systems the world had ever seen. At the top of the state structure is the Presidential Council. The Council consists of three members, Bosniak, Serb and Croat. Members alternate the chairmanship of the council every 8 months. The current Bosniak member of the council is Šefik Džaferović, Croatian Member Željko Komšić and Serbian member Milorad Dodik. 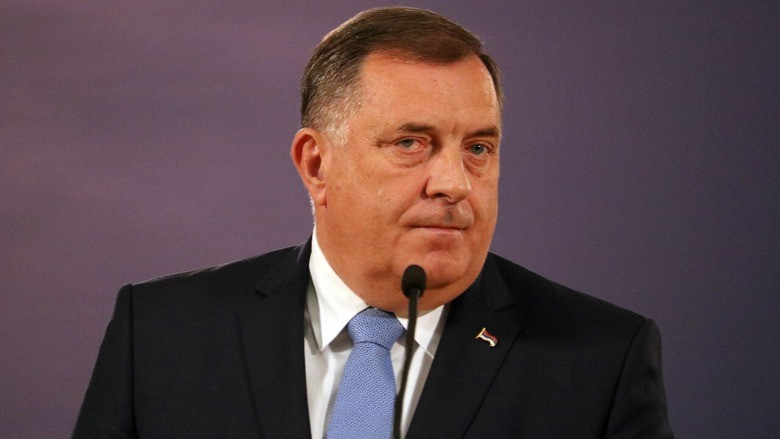 RUSSIA AND CHINA STRENGTHENED THE HAND IN THE BALKANS

In October, Serb leader Dodik decided to withdraw Serbian members from judicial, administrative and financial state institutions. On October 12, Dodik banned the Bosnian judiciary, security and intelligence units from operating in Republika Srpska. It was stated that by the end of November, these would be replaced by only Serb institutions.

Dodik also stated that the Bosnian Serbs wanted a separate army and they were making plans for this.

The international community's High Representative in Bosnia, Christian Schmidt, sent a report to the United Nations, stating that the country is in danger of division and that there is a risk of conflict again.

Schmidt stated that if the Bosnian Serbs re-establish their armies and the armed forces of Bosnia and Herzegovina split into two, more Peacekeepers will need to be sent to the region to prevent a new war.

International observers have warned that even if Dodik does not move towards secession, his actions could seriously destabilize the country. It was also stated that it can cause violence, forced migration and economic hardship. The regional and Bosnian politics of the European Union (EU) have been dysfunctional for many years. While the EU is so ineffective in the region and even escalating the crises, the USA seems to have lost its interest in the Balkans. Bosnia could not even find a place in the US and Western media until the last separation debates.

Russia, on the other hand, is gradually strengthening its hand in the ongoing Bosnian crisis. While Dodik was referring to Russia by saying that the friends of the Serbs will come to the aid, the Russians almost challenged the West by announcing that a new war might break out in the Balkans last week. At the United Nations Security Council (UNSC) session, where the mandate of the peacekeeping forces in Bosnia was extended, Russia's and China's blocking of High Representative Schmidt's speech, while the other UNSC members accepted it, was seen as Russia's last diplomatic victory.

Turkey also closely monitors the developments in Bosnia and Herzegovina. President Recep Tayyip Erdoğan, who is expected to play a mediating role in the growing political crisis, first met with Bakir Izetbegovic, Member of the Presidency Council of the People's Assembly of Bosnia and Herzegovina, on November 2. Later, on November 9, he met with Dodik at the Presidential Palace.

Continuing his contacts to reduce the tension in Bosnia and Herzegovina, Erdoğan said, “We see every development in the Balkans as our own domestic issue. We took the initiative to solve the problems." 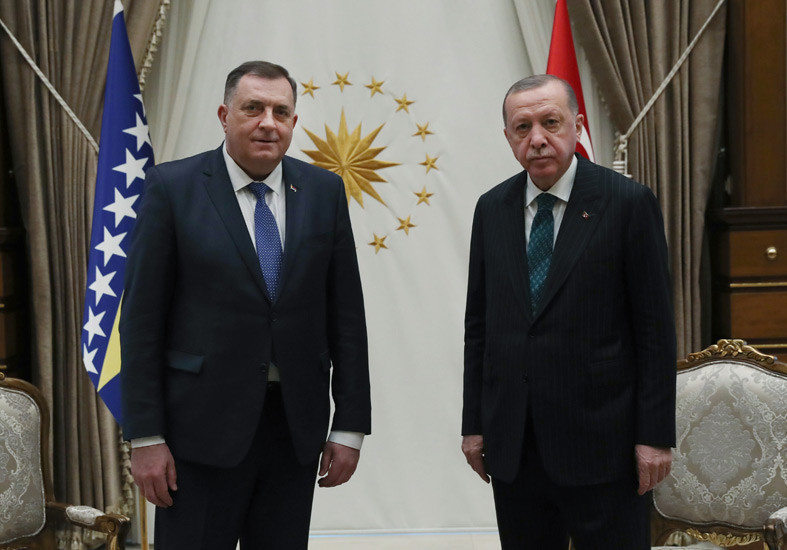 Serbian leader Dodik had stated in a previous statement that he offered Turkey, Serbia and Croatia to mediate in order to resolve the disputes. He also underlined that he trusts Erdogan, not Western leaders.

Erdogan, who met with two senior officials within a week, had previously received representatives of Bosnian non-governmental organizations at the Huber Mansion.

Hamdi Fırat Büyük, a political analyst and journalist working on the Balkans, talked about possible developments while evaluating the latest situation to T24. Büyük said that Turkey wants to hold a tripartite summit that will include the Presidents of Serbia and Croatia, representatives of the peoples in Bosnia and the leaders of the largest ethnic parties here.

Büyük said, “Erdogan wants to bring the parties to the same table under the coordination of Turkey. This is a big event. It makes a lot of noise and I see it as a window of opportunity in terms of repairing relations with the West."

WHAT ARE THE POSSIBLE SCENARIOS?

Since a system is built on three founding identities in Bosnia and Herzegovina, it is technically very difficult to realize a separation that disrupts its territorial integrity. According to the Dayton Agreement, the territorial integrity of Bosnia is protected by the UN Security Council and the International Court of Justice. Therefore, a unilateral declaration of independence or a decision to unite with another state is contrary to international law and creates counter-sanctions. 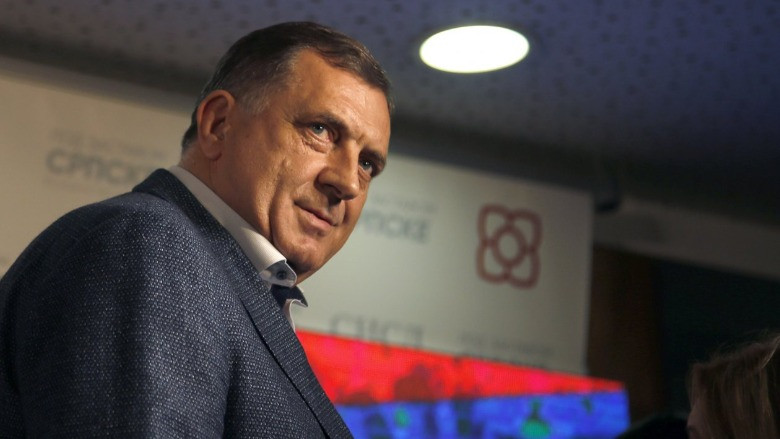 From this point of view, it cannot be said that there is a rational side to the separation of the RS from Bosnia. In order for such a separation to occur, a consensus must be achieved in the eyes of the international community.

Dodik is trying to undermine the constitutional order within the state as much as he can and try to create an entity with as many rights and privileges as possible, without responsibilities to the Office of the High Representative (YTO) and the state. Such an entity means a maverick structure that Russia can easily use in the region.

While Bosnia is experiencing its most important post-war crisis and facing the threat of war, there are serious concerns about the future of Bosnia due to the indifferent and wrong politics of the West, the rhetoric of local politicians and the increasing influence of Russia. The West needs to learn from the Bosnian War and intervene in the Bosnian crisis before it's too late. Turkey, on the other hand, has to show that it has the capacity to create a constructive effect in this crisis and does not work against the West, thanks to the influence it has had on Bosnians and its growing relations with Serbia. Otherwise, the dark and bloody days of the 1990s will once again descend upon Bosnia.