One of the most striking results of the research conducted for a report prepared by the think tank European Council on Foreign Relations (ECFR) concerns Turkey. Europeans see Turkey not as a strategic partner or ally of the union, but as an “enemy” or “threat”. Moreover, according to the survey, Turkey is a more serious threat to the EU than Russia or China.

While Russia and China were evaluated as strategic partners rather than opponents in the research, Turkey was the only country defined as "enemy" by Europeans among all countries.

In particular, 53 percent of the people in France and 52 percent in Germany define Turkey as the main enemy of the European Union. This perspective is 45 percent in the Netherlands, 42 percent in Denmark and 40 percent in Sweden.

Many Europeans would like the EU to continue to criticise Turkey and China for violating human rights, the rule of law or democratic values.

HOW DID THE PERCEPTION OF ENEMY OCCUR?

The main reason for the perception of Turkey in Europe is the speeches and foreign policy policies of the countries and the news in the press in this direction.

When we look at history, it is possible to encounter examples where the perceptions towards countries are not managed, the governments are changed, terrorist attacks are exposed and the economies are paralyzed. In this case, the management of perception has become very valuable for states, which are described as one of the most complex structures.

In this respect, the reason why perception management is considered a state policy in today's societies is revealed.

It is also a part of the perception that countries underestimate each other's achievements or fuel the disagreements among the people of the countries that are seen as enemies. With the impact of technology and globalization, the desired perception can be created in far less time.

Even though there are different opinions in Europe, in general, expansionist policies are considered a threat by Turkey. The EU sees Turkey as a potential threat that is gradually breaking away from the Atlantic structure, turning into a power close to Asia, and that Europeans will increasingly have to speak in the language of power.

However, the selfish policies of the EU countries, especially the Covid-19 vaccine and refugees, their unfair behavior towards Turkey, even the fact that some EU countries pose a threat to Turkey's security, support terrorist groups in Turkey, have led Turkey to new searches in international politics. may be pushing.

So, how does Turkey see other countries?

TURKEY'S PERCEPTION OF THE WORLD

In partnership with Kadir Has University Turkey Research Group and Global Academy a study called “Public Perceptions of Turkish Foreign Policy” was conducted under the coordination of Prof. Dr. Mustafa Aydın. Within the scope of the study, the public's perspective on Turkish foreign policy and their approach to foreign policy-related issues were evaluated.

In the research conducted in 26 provinces across Turkey, survey questions were asked to a thousand people over the age of 18. 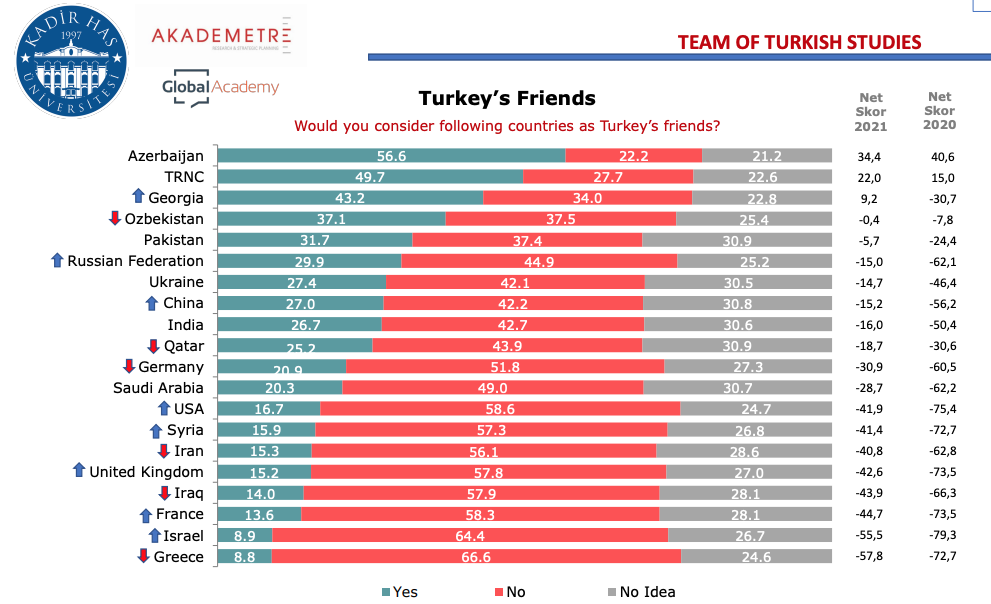 Azerbaijan, which is seen as a sister country, takes the first place in the list of countries that are seen as friends of Turkey, while the TRNC (Turkish Republic of Northern Cyprus), which is called the baby homeland, is in the second place.

Israel and Greece are at the bottom of the list. The escalation of tensions in the Eastern Mediterranean and the Cyprus issue caused a crisis in relations with Greece. On the other hand, Israel's attacks on Palestine and the lack of good relations with Turkey from the very beginning caused it to be among unfriendly countries.

The two most striking countries on the list were China and Russia, which have seen positive changes since last year. The deteriorating relations with the West recently caused Turkey to turn its face to Asia. This has changed the perspective towards countries with good relations in the region.

THE MAIN THREAT IS US

In the ranking of countries posing a threat to Turkey, the USA is thought to pose the greatest threat compared to other countries. The S-400 crisis, the sanctions against Turkey and the new US President Biden's distance in relations with Turkey are the biggest factors in this situation. 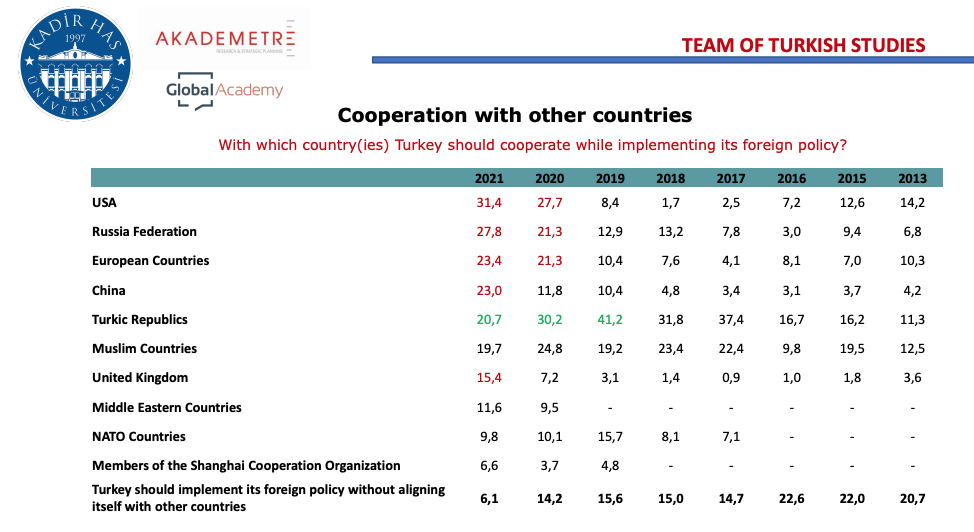 However, the United States is one of the countries with which Turkey should cooperate the most in foreign policy.

Compared to previous years, China and the UK stand out with their higher rise among the countries where cooperation is desired. On the other hand, it is reflected in the list that the cooperation with the Turkic Republics in foreign policy is seen as less important.

The Eastern Mediterranean comes to the fore in regions where a more active policy should be followed. 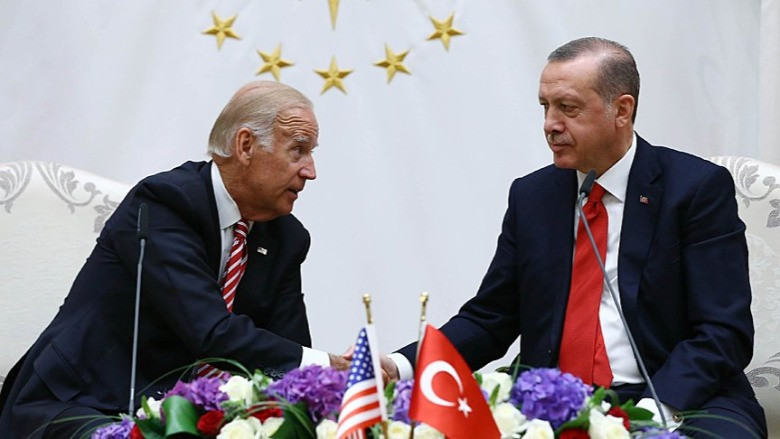 Although there are periodic crises in Turkey's EU membership process, it continues. According to the research, 59.3 percent of Turkish citizens support Turkey's accession to the EU. However, the rate of those who answered "No" to "Could Turkey become a full member of the EU?" question is 55.3 percent.

According to the survey results, almost half of Turkey's EU membership is thought to be blocked. The main reason for this is "difference in religion and identity".